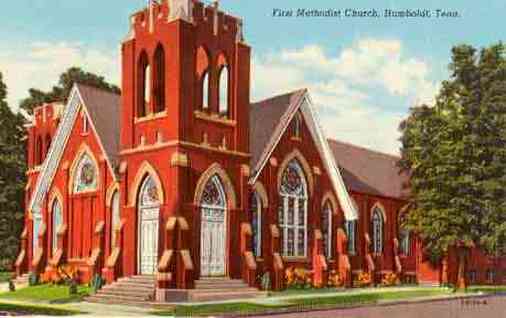 The second church to organize in Humboldt was the Methodist Church. This church was organized in 1860 by Rev. Nathan Sullivan. The congregation worshipped in a vacant store building for some time following the organization. This store building was among those built just prior to the coming of the L&N Railroad in 1859 and stood in the present downtown. The first regular pastor was the Rev. R.H. Mahon. Later the congregation worshipped in the old Masonic Hall that stood on the southeast corner of Burrow Street and 16th Avenue.
In 1867 a very good framed building was erected, and this building was used until 1899, when it had to be razed to make way for a the present building.
Charter Members of the church were: Mr. And Mrs. Frank Transou, Dr. and Mrs. Ben W. Clement, Mr. And Mrs. J.J.R. Adams, Mr. And Mrs. W.L. Dunlap, Mrs. Mattie Sharp, Mr. Neill A. Senter, and Judge and Mrs. W.I. McFarland.
Judge McFarland moved his law offices from the corner where the present church stands, so the new building could be erected. He donated this land on the northeast corner of Crenshaw Street and 12th Avenue.
There were 392 members when the present church was erected.
When the new building was completed, it was dedicated by Bishop Galloway, with R.W. Hood as the pastor of the church.
In 1928, Rev. E.W. Crump was pastor. It was voted to enlarge the sanctuary and build an educational building.
In 1946, a copper tower and chimes were added to the church. A new organ was also installed in the church. They also installed a baby grand piano. Rev. A.L. Dickerson was the pastor at the time.
The Memphis Annual Conference of the Methodist Church has entertained the church four times.
In 1875 with Rev J.M. Scott as pastor, in 1895 with Rev. H.W. Brooks as pastor, in 1907 with Rev. E.S. Harris as pastor, and in 1946 with Rev. A.L. Dickerson as pastor.
The Woman’s Missionary Conference has entertained the church two times.
Frank Transou was the first Sunday School superintendent.
During the pastorate of Rev. William T. Barnes, an expansion program was launched. A new educational annex was added. A new parsonage was erected at 404 N. 17th Avenue in 1957. The old parsonage was used as Sunday School rooms until the new annex was built.
A few years ago the church underwent a major renovation and restoration.
The current pastor (2000) of the church is Rev. Larry Kendrick.

Written and by John Blankenship
February 8, 2000 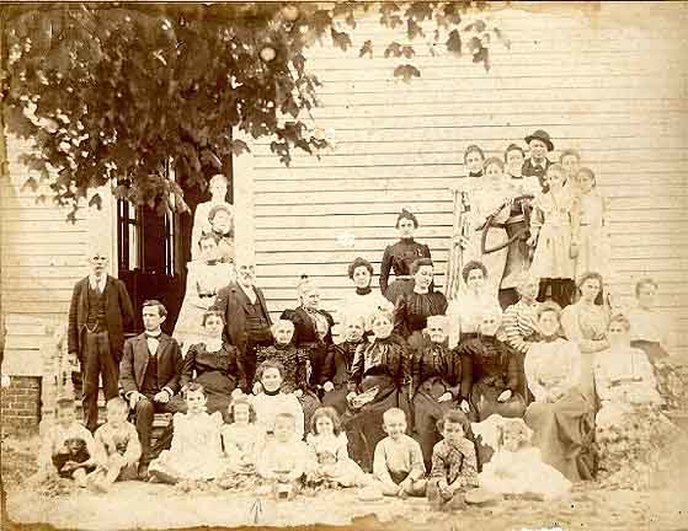 This is a group of Methodist's taken in Humboldt, at the old church that was erected in 1867.
This picture was taken prior to 1899, because this church was razed in that year.